I can’t recall how often I drove past Kelly Tarlton’s ever since I moved to Auckland. Last week I finally went inside the Aquarium for the very first time. Now I can’t recall what took me so long; what a lovely little place!

OK, it’s not the most convenient place for photographers. It’s much easier to capture the sea in the sun instead of moving animals in low light. I actually had to up the ISO to 6,400 for most of the photos below. Yikes.

And I reached a moment when I completely gave up the happy snapping. Me in low light on a conveyor belt leading through the shark tunnel full of moving fish…you get the idea.

For more fun facts and information about each of the photographed animals please click on the images and read their captions. 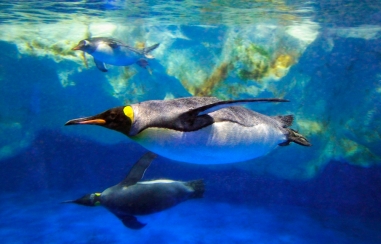 The King Penguin is the second largest of the 17 species of Penguin – the largest is the Emperor Penguin. 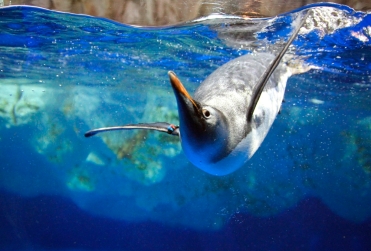 This Gentoo Penguin was in a race with a second penguin when he suddenly decided to confuse his opponent with a 180° turn. You basically see here how penguins break under water.

Jellyfish are ancient creatures which have lived in our oceans since before the dinosaurs roamed the earth.

Spiny sea dragons are found in the ocean depths, and are rarely seen by anyone other than deep sea divers.

Despite their popularity in the aquarium trade, mandarinfish are considered difficult to keep, as their feeding habits are very specific.

Two employees are hand feeding the fish each day. On special days they also do that in the shark tank. 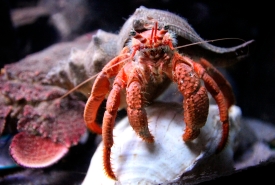 A hermit crab has to move several times throughout its life as it grows in size and must find larger shells.

The Octopus has an interesting aquarium location I find. Take two steps left and you’re in the Aquarium Store finding yourself sorting through cuddly toys of all shapes and sizes.

A starfish is probably nothing too special for each Kiwi; but how about a mussel eating starfish, huh? Can you see it?

If you wonder about the name: Kelly Tarlton was a New Zealand marine archeologist and diver who wanted to make the wonders of the under water world more accessible to the public. Tragically he died only 2 months after the aquarium opened in 1985.