A little over a year ago, my husband, our 2-year old daughter and I boarded a plane to Spain — the first one of 18 planes in 12 months — to embark on a big adventure. Project title: paternity leave abroad.

After a short stop in Madrid, our second plane brought us directly to La Palma, La Isla Bonita, the first of 18 locations in 12 months. Our luggage decided to arrive two days later. So much for a perfect start.

But apart from that small incident, things went rather well. Our careful planning, which lasted months, has been worth every single minute and allowed us to relax, discover, and … work. While my husband got to test dozens of new playgrounds in his temporary role as a full-time dad, I was spoiled with workspaces close to nature. Nothing boosts my creativity more than a panoramic view.

Curious yet?
Here are my workspaces of the past year, including my all time favorite: Parua Bay, Northland, New Zealand. Gotta 💜 being a digital nomad. Would I do it again? Anytime! 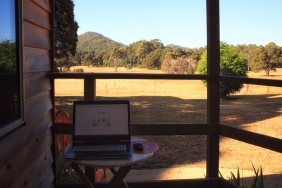 February 2018: Riana, Tasmania, Australia. With co-workers on the inside and the outside. 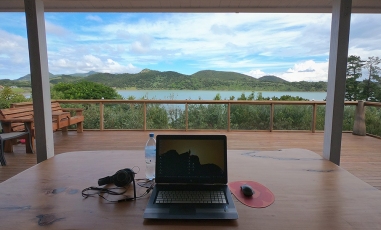 Since September 2018: Nantes, France. With a view over the Loire River… to be continued!

Which fabulous digital nomad workspace can you recommend?

Meeting a kiwi up close is a wonderful moment for kids

If I was to recommend one New Zealand location for kiwi watching it would be the region around Whangarei in Northland. Already a few years ago, I was lucky enough to meet Sparky here. In March 2018, I made acquaintance with Ross and 3 of his friends. The 4 kiwi birds have been released into the wild at Parua Bay (Whangarei Heads), after settling over from the stoat free Limestone Island.

Since more than 15 years, Backyard Kiwi (WHLF) is monitoring wild kiwi in the area and capturing chicks shortly after they have been hatching. The birds then get transported to the predator free Limestone Island off the Whangarei Heads coast where they can grow and get strong enough to stand a chance of survival against all kinds of mammals populating New Zealand’s mainland.

Once strong enough (after 6 months or more), the kiwi are recaptured and brought back to Whangarei Heads to introduce wider genetic variety into the area. This might sound like a lenghty procedure, which still does not guarantee the kiwi’s survival once it’s back on the mainland. Still, the success rate speaks for itself: from previously 80 kiwi birds in the region (2001), the number went up to 800+ kiwi (2018). Their movements are tracked and regularly updated in this map, proving that the Whangarei Heads community can truly claim to have kiwi in their backyard.

Backyard Kiwi is organizing regular kiwi releases. If you would like to use the occasion to meet these nocturnal birds up close, keep an eye on their website or Facebook page, where they announce their release dates ahead of time.

Backyard Kiwi staff has been sharing valuable information, like the fact that uncontrolled dogs are a major threat to kiwi 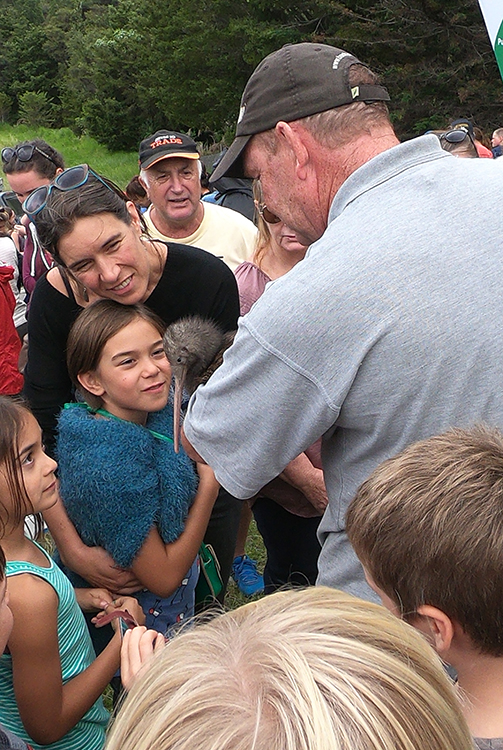 Before releasing the kiwi birds into the wild again, locals and all other visitors had a great chance to see the kiwi live and ask questions 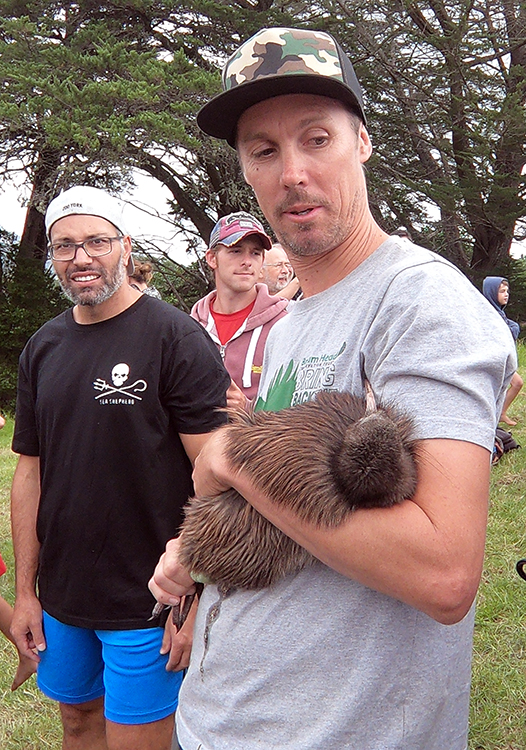 Whereas this one didn’t mind and fell asleep again 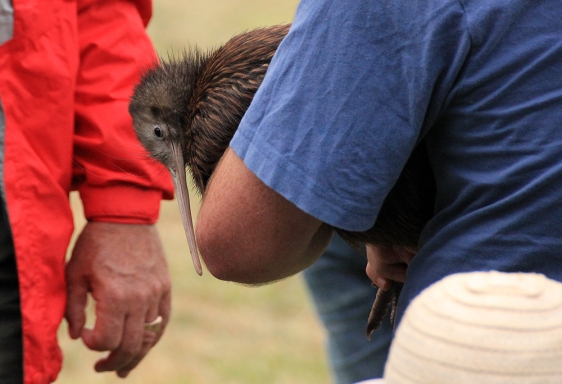 Ross was the one who got released first

On the way to Ross’ new home in Parua Bay

Home sweet home! This is where the kiwi got released. After catching up some sleep it probably went out to search for food. The kiwi birds can move around freely and aren’t forced to stay at their release place. Some of them have been tracked over a distance of 10 kilometres.

Here is a short bonus video from the moment when the kiwi got placed into his new home in Parua Bay. Good luck little fellow!

The quieter you become, the more you can hear.
~Ram Dass

Please watch the video below if you are curious what you can actually hear in the forest surrounding this lake:

Thanks to one of my Kiwi tweeps (@nickwallen, a savvy Kiwi Marketing Manager) I recently discovered the New Zealand Story, a video “that defines the distinctly Kiwi attributes that make us [New Zealanders] unique”. To be precise, the story defines these three attributes as “typical lil ol’ EnZed”: Open spaces, open hearts and open minds.

After living in New Zealand for 3.5 years I wholeheartedly agree with its content, though the video doesn’t tell the whole story. How could it, in 3:45 minutes? Don’t get me wrong — it’s a great story, but it’s a flawless one as well. It’s TOO perfect. It lacks a little twist; or did you ever lose your heart to a perfect protagonist? I didn’t!

So I decided to use the occasion to publish my secret list of Kiwi curiosities (yes, I kept record), which – in addition to the New Zealand Video Story above – completes the picture and makes that small country on the other side of the globe uber adorable (at least for me). Have a read and let me know if you agree or disagree: 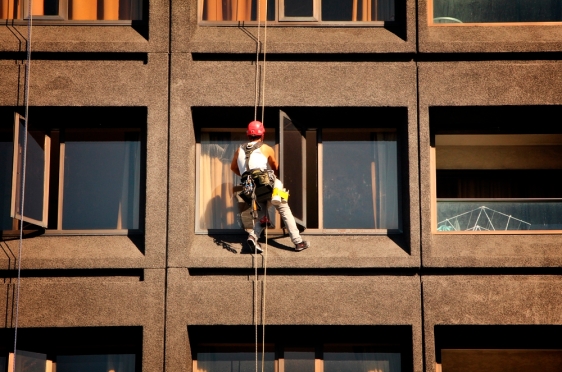 Doughnut capital in New Zealand — Springfield, what else?! 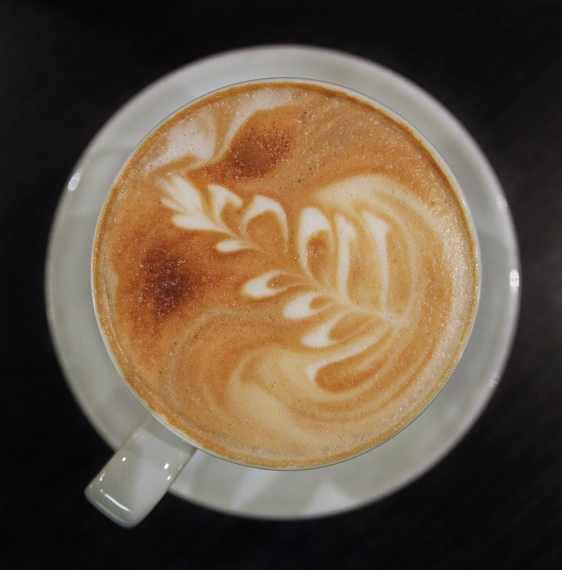 5. On the road — (Spoiler) alert: Kiwis are bad drivers

There you go, that’s my personal list of Kiwi curiosities. It’s almost a declaration of love, ain’t it? :)

Quite a collection for someone who thought the Haka is the “most hilarious thing” about New Zealand. That’s 3.5 years ago now. Rookie mistake!

Are you as excited about the latest The Hobbit trailer as I am? Five weeks from today I will sit in one of those wide and comfy cinema armchairs, glued to the screen, absorbing Peter Jackson’s latest visual tricks like a sponge, while marvelling at the Trilogy’s sceneries. 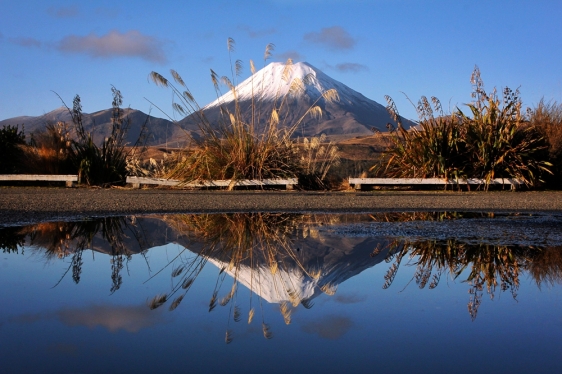 Best thing about it: I have been there! Most outdoor scenes have been filmed in New Zealand, just like most scenes for The Lord of the Rings. New Zealand is officially Middle-earth; and Mt. Ngauruhoe in Tongariro National Park is the most popular location among orcs fans, as they can attempt to climb “Mt. Doom” and conquer Mordor.

One does not simply walk into Mordor? Oh well, I must have gotten lucky the last 6 times I visited. Yes — visited. I looked and behaved like a tourist in Mordor, and of course I captured it on film (in the form of a 16 GB memory card).

On a foggy day, the region is indeed all about doom and gloom (like in the movies). But on all other days, Tongariro is one surprisingly colourful place to discover. I have been lucky enough to visit the region during all 4 seasons. Each season is unique and totally worth it. But let’s allow some photos to talk for themselves.

SPRING: Parts of the Tongariro Crossing are still covered in snow

View over the Red Crater

Turn around 180° and you will see the Blue Lake

Turn around another 90° and you will discover the Emerald Lakes

Getting close to the Emerald Lakes

SUMMER: Not how you imagine summer? Weather forecasts are nearly impossible for Tongariro

But you can always marvel at the Park’s “low altitude beauty”, like the Tawhai Falls 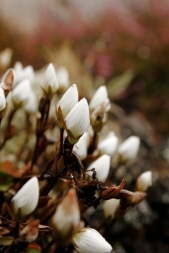 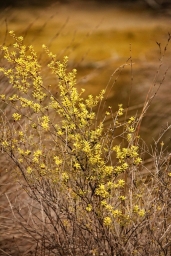 Or you can stroll around Lake Rotopounamu; a natural shelter from the rain

Rotopounamu is a bird’s paradise; this little fellow is a North Island Robin

AUTUMN: Returning to Tongariro in autumn looked like summery doom and gloom all over again 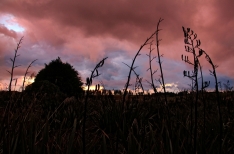 Though magic was in the air

The next morning looked very different 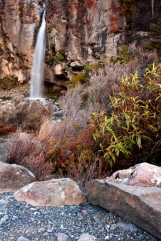 Or the walk to the Taranaki Falls

Passing the most colourful moss 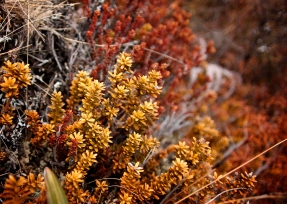 Moss in all kind of shapes

WINTER: There is rarely snow on the lower altitudes

Only Tongariro’s volcanos are covered in snow

Perfect place for a snowboarding session

Skiing is fine too of course 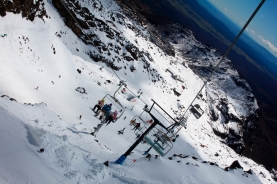 What an enchanted place!

Who else is looking forward to rediscover New Zealand in The Hobbit: The Battle of the Five Armies?

🌷🌷🌷⁠
During last year's lockdown, Nantes city centre was decorated with thousands of flags and pompoms. During this year's lockdown in spring they opted for flowers and petals. Yesterday was the first day where we can travel beyond 10 km again! 🌹 #LightAtTheEndOfTheTunnel 🌹⁠
Happy May! ⁠
💜🤎💜🤎💜
🌼🌼 Just hanging out 🌼🌼