What would the Auckland skyline be without the Sky Tower? Well, there is actually an interesting piece from The New Zealand Herald allowing you to scroll over an interactive photo to look at Auckland’s skyline before and after the Sky Tower has been opened in 1997. But during the past 15 years it became hard to imagine New Zealand’s biggest town without its lanky landmark, which makes the skyline so much more interesting for photographers.

Photo forums are filled with the question where to get the best view over Auckland and which locations to visit for the best skyline pictures including the Sky Tower. I got curious myself. So I went out and explored some spots surrounding the city’s CBD. Here are my favourite skyline photos and Sky Tower facts (click on a photo to view it in large). 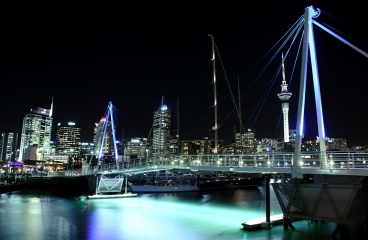 View from the Orakei Jetty at Takaparawhau Point – there are 1,267 steps from the base of Sky Tower to Sky Deck

View from the Westhaven Marina – in case of a magnitude 8.0 earthquake occurring within 20 kilometres the Tower would remain standing

On top of Mt. Victoria in Devonport – Sky Tower is one of the tallest buildings in the Southern Hemisphere

Some of these photo locations are actually worth being photographed themselves from the Sky Tower. At 220m above ground you can get a 360 degree view right across Auckland. Have a look at how impressive the Spaghetti Junction looks like from here. You can also try capturing the opening / closing Wynyard Crossing when ships are leaving the harbour or coming back from the sea. 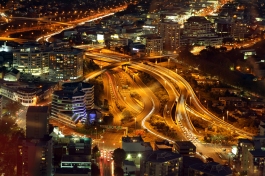 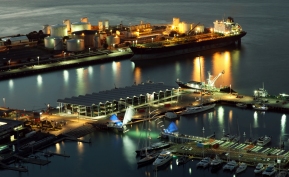 I visited two more locations: Shelly Beach Road and Mount Eden. Both are good spots to have a view over Auckland City. Check out the two panoramas below to get an idea of the view. However, you need a very good zoom lens for both because the skyline is rather far away. Alternatively it could be worth trying a fish eye on Shelly Beach Road as it might allow you to capture the Sky Tower and the Harbour Bridge in one photo.

All photos for this post have been taken with my 17-70mm lens.

On the Shelly Beach Road Bridge above the Northern Motorway

View over Auckland from Mount Eden

I would be happy to test more Auckland skyline photo locations if you share them with me.